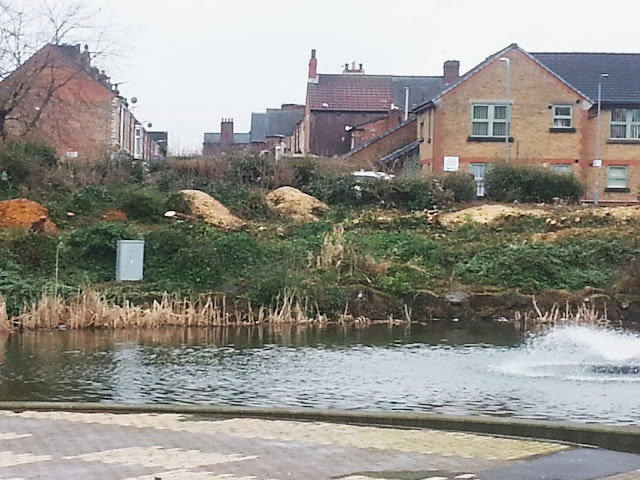 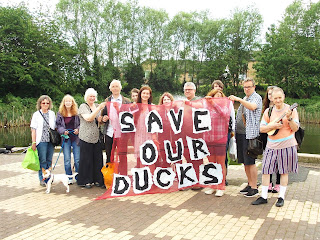 Last Thursday Ashall Projects, the Developers for the Councils Centre Square project, chain sawed trees from around Wilkinson lake and the surrounding park land.  Remaining logs and wood chip were hauled off to the empty Phase one building site (the old registry building site) where no work has yet started.

“Cutting down the trees at this time, well before any work has even started on Phase one of the project, is just malicious robbing the people of Middlesbrough of what was a lovely pond well used by the public” said Friends of the Earth Co-ordinator Robert Tucker.  “It’s a stitch-up, the Council said these New offices were vital to bring new jobs to Mbro, but almost all of Phase 1 will be the Council moving in - hardly any new jobs at all. Real work on Phase 2 may be months or years away and was only supposed to start after companies had been found to take up rooms, but they have vandalised this public space. The birdlife is bewildered and shocked.  The public meantime can enjoy tree stumps instead of lovely green trees in the showpiece centre of our town.  To say people are angry is an understatement”. 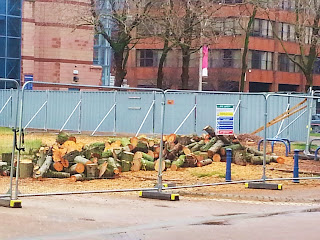 A compromise plan was proposed by Friends of the Earth saving Wilkinson lake and the trees there from being turned into a private underground car park.  The New Offices could use half of the car spaces behind Mima and other spaces instead.  This was turned down by the Council.
The controversial development deal meant that Middlesbrough Council gave the land in Centre Square, worth millions, to developers Ashall Projects for free if they built the New offices. 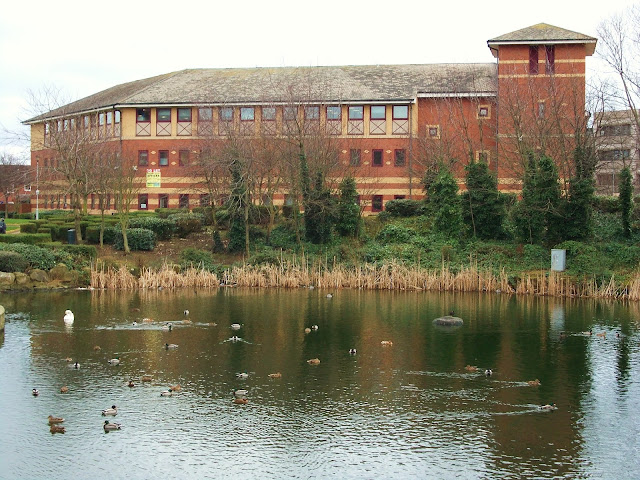 New Middlesbrough Centre Square offices really needed?
"This is a Damming photo of premier empty offices overlooking the beautiful nature lake Middlesbrough Council plans to bulldoze so they can build yet more offices and a car park! You couldn't make it up.  We were asked by the public to look into this", said Rob Tucker, Co-ordinator for Middlesbrough & Redcar Friends of the Earth. "While we all want the Boro to prosper the council should scale back or cancel these plans in Centre Square and listen to people.  There is clearly good office space available here and in Middlehaven, as well as empty plots more suitable for development ". 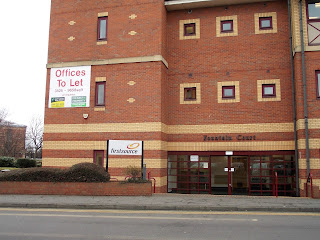 Fountain Court, the huge office that was missing from Mbro Councils report on Empty office space and the Evening Gazettes article, is overlooking the very Nature pond they want to turn into more offices and a car park! Notice the TO LET sign on the left of the building in the photo clearly visible from the Civic centre and town hall.  Fountain Court is a 3 storey modern building built in 1990. The ground floor is empty and the TO LET sign indicates that the other two floors may be available if required.  Far from housing staff with high incomes that the report said would be attracted to Middlesbrough by posh offices, stories 2 & 3 houses a call centre with most folk on £7.50ph.  The KPMG economic report that suggested blue chip companies would come to Middlesbrough but had been put off by a lack of premier office space, is still held as confidential by the council and is off limits to the general public. How substantial is the evidence for this?  Before the premier office scheme, the council had other ideas of building a 5 star hotel on the land as well as extend Mima.
Melrose House, (below photo) is another mainly empty office building, located just yards behind Fountain Court and the nature pond. 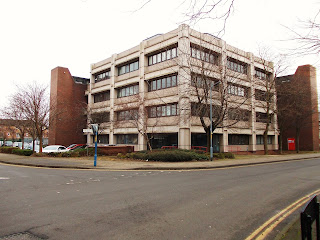 A consultation exhibition canvassing opinion on the proposed scheme is being held at the Central library, for two weeks starting Friday 24th Feb.  You can object to the development (or support it, here)
http://www.centre-square.co.uk/feedback-form/

What colour do you want the gates of local fracking sites to be? 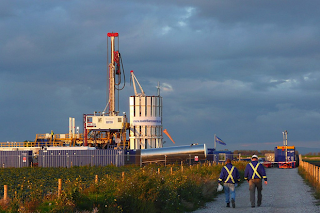 What colour do you want the gates of local fracking sites to be?
Perhaps Red?  That could be the limit of local people's input to decisions about shale gas production, according to a letter leaked to Friends of the Earth.
The letter reveals that the government is planning to take decision-making away from local councils. The letter was written by Energy Secretary Amber Rudd, Communities Secretary, Greg Clark and Environment Secretary Liz Truss to George Osborne last July and it sets out proposals for a government shale gas strategy.
The ministers say they want “a maturing shale gas production industry” within 10 years.  Among the proposals to make this happen is changing who would take decisions about planning permission for shale gas production.
The Govt has ALREADY taken away UK landowners mineral rights to what is beneath your own home so they could beaver away without your permission, which they at least have in the US. The Govt has ALREADY moved the goalposts to allow fracking under national parks.  In repeated surveys the general public have increasingly said  they are against fracking, but the Govt and our MPs are not listening.
At present only the cost of oil, which has bankrupted some US fracking companies, is holding them off and North Yorkshire will have little say being in the "desolate North East" when it bounces back up. Contact your MP (who maybe pro fracking) and tell them what you think, get involved with Friends of the Earth or Frack Free Cleveland but do not wait until it is to late.

Rob Tucker
Co-ordinator Mbro, Redcar & Stockton
Friends of the Earth
Posted by eco-bob at 05:36 No comments:

"All your local Candidates will be there and this is your opportunity to ask them those questions that interest YOU.  It is not just the party you are voting for but the person as well!  We have had good feedback from our previous election events over many years.  So if you are undecided who to vote for come along" said Rob Tucker co-ordinator for Middlesbrough & Redcar Friends of the Earth.
"We would ask that only people registered to vote in that area attend".

Friends of the Earth have objected to this new application for a Biomass power station at Port Clarence and hope that Stockton council will listen to other views rather that just going for the jobs angle.  Details of this objection are below;
1) The RSPB, GreenPeace and Friends of the Earth have examined the issue of Biomass and found it not to be carbon neutral http://tinyurl.com/meqzfbo
2) The UK waste wood source that this power station is expected to use is likely to become increasingly scarce and there are not stringent enough regulations to stop it using other sources
3) Although this power station may have the capability for CHP (Combined Heat and Power) it is unlikely that this option will ever be taken up. The previous application looked at possible CHP usage and examined piping it across the Tees to housing on the south side, but there is no new housing stock there. MGT’s application in contrast, had several companies interested.
4) Eco2 sold its last Biomass power station straight off to another company which is not good practise http://www.walesonline.co.uk/business/cardiff-biomass-plant-sold-160m-5716610
5) Teesside has a number of biomass projects that already have planning permission; Air products, MGT, Sembcorp
6) Although this power station will not hold waste wood stock piles, a number of yards on Teesside and elsewhere that will supply this power station have had major fires one of them lasting 16 days http://www.gazettelive.co.uk/news/teesside-news/uk-wood-recycling-plant-blaze-6854278

This is a subsidised scheme, taxpayers money, and it should be well spent. If Eco2 had expressions of interest for CHP then this would change the application, but they do not. 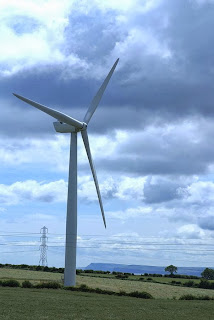 Our local Friends of the Earth group are supporting the Bankfields windfarm as a good project and hope it will be given planning permission subject to addressing consultee concerns.

Banks Renewables have a lot of experience of windfarms, energy & construction projects. They should be expert in minimising noise, dust, disruption and getting the project to run smoothly.

Noise should not be a problem in operation or construction. HGV traffic will come from the A19/A174 or Teesport and down Wilton Lane.

The farms that are in the 700-900m zone are benefiting from the scheme and are being compensated. The Mount Pleasant row of terrace houses is over 1km away from the scheme.  It has been agreed that the scheme will provide up to £5000 per house for energy efficiency or renewable measures and as I believe that Mount Pleasant is off the gas mains this will be a major plus for them.

A third of project costs will be spent in the NE. This is one of the first projects in the UK where the x5 towers will be manufactured locally. Up to 14 apprenticeships will be created and £2m go to a community fund. New provision is to be made for wildflower meadows, bat habitat and nature ponds.

Over a large part of Guisborough the scheme cannot be seen due to buildings and where partially visible are not prominent. It will not affect tourism, house prices or hypnotise drivers!

https://planning.redcar-cleveland.gov.uk/(S(rjnrlhrb3vm3q0medh0z4byj))/welcome.aspx
The Application R/2013/0674/FFM can be commented on till the end of the week 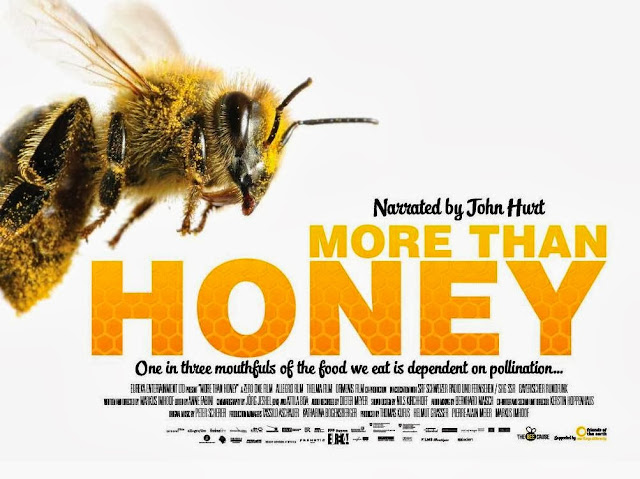 Screening of film "More than Honey" Friday Oct 4th 7pm with Andy McDonald MP
you are invited to our screening of an excellent film "More than Honey" at the Middlesbrough Quaker Friends meeting house on Friday 4th Oct 7-9pm with a small talk & cuppa at the end by Derek Herring of Cleveland Beekeepers Association and Andy McDonald Middlesbrough MP.  Bees are having a difficult time worldwide and the UK Govt has said it will have a plan for Bees (not a plan B :-) but has not given any details or budget!

Please could you mention the event at meetings, and find it on FaceBook inviting relevant FB friends & forwarding this email in the North Yorkshire area.
http://darl-quakers.gn.apc.org/?page_id=39